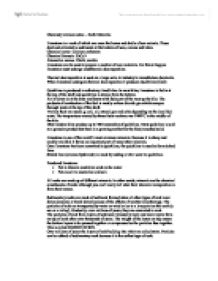 Chemistry revision notes - Earth Materials Limestone is a rock of which was once the bones and shells of sea animals. These died and collected as sediments at the bottom of seas, oceans and lakes. Chemical name: Calcium carbonate Chemical formula: CaCo3 Alternative names: Chalk, marble Limestone can be used to prepare a number of new materials. For this to happen limestone must undergo endothermic decomposition. Thermal decomposition is used on a large scale in industry to manufacture chemicals. When limestone undergoes thermal decomposition it produces Quicklime (CaO) Quicklime is produced in refractory-lined kilns. In most kilns, limestone is fed in at the top of the shaft and quicklime is drawn from the bottom. Air is blown in at the base and burns with fuels part of the way up the kiln. The products of combustion of the fuel is mostly carbon dioxide gas which escapes through vents at the top of the shaft. Various fuels are used e.g. coil, oil, natural gas and coke depending on the local fuel costs. The temperature created by these fuels reaches over 1000?C in the middle of the kiln. Most modern kilns produce up to 300 tonnes/day of quicklime. Most quicklime is sold as a granular product but there is a growing market for the finely crushed solid. Limestone is one of the world's most common minerals. ...read more.

Brittle rocks fracture (fault) under stress. The earths crust is not a continuous layer but is made up of many separate units called Tectonic Plates. The plates move by convection currents in the molten rock of the Mantle. This moves the plates very slowly at the rate of a few centimetres a year. Over millions of years the continents have separated to reach their present positions. When an oceanic plate moves below a continental plate, the rock gets very hot and melts to form Magma. This then reaches the surface in Volcanoes. Also, where the oceanic plate moves downwards, a very deep area of sea floor is formed. These types of areas are called Ocean Trenches. Formation of coal and oil: In the carboniferous Era, which lasted 65 million years and ended 280 million years ago: The British Isles was on the equator. The land was tropical forest. Coal was made from dead animals and plants. The plants did not rot because they got covered in mud so no oxygen could get to them. The coal seams were formed by weight of new deposits squashed the tree layers into thin seams. Coal was formed 280 million years ago. Fractional Distillation: When oil is pumped from the ground it is as a thick, black, foul smelling substance called Crude Oil. ...read more.

The carbon dioxide is acting like a 'blanket' around the earth and it is trapping the heat from the sun, which leads to a raising of the earth's temperature. This is called the greenhouse effect. Acid rain is made when acid gases dissolve in rain. Carbon dioxide is made when carbon burns in the oxygen in the air. When coal is burned it releases the gas sulphur dioxide. This also makes acid rain because it dissolves in rain to form sulphuric acid. Inside car engines, the temperature is hot enough to make nitrogen and oxygen join together to make nitrogen oxides. These dissolve in rain to make nitric acid. When acid rain falls on the earth it has the following effects: * Stonework on building is dissolved and crumbles away * The water in rivers and lakes becomes too acidic so plants and animals die You could reduce the acid level in rivers and lakes by putting limestone in it. The gases in the atmosphere originally came from volcanoes. The gases produced were carbon dioxide, hydrogen chloride, argon etc. There is not hydrogen left in the atmosphere because it was so light it evaporated and escaped. Distillation of oil: 1. Vaporisation - the thick oil is heated to from vapour/gas 2. Separation - lighter molecules move upwards and heavy molecules sink. Lighter molecules move upwards to the coolest region at the top. There is a temperature and density gradient. 3. Condensation - the vapour is cooled to form a liquid (or solid) ...read more.