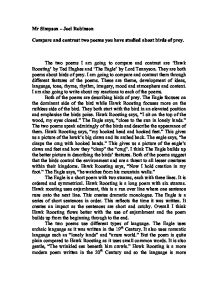 Compare and contrast two poems you have studied about birds of prey.

Mr Simpson - Joel Robinson Compare and contrast two poems you have studied about birds of prey. The two poems I am going to compare and contrast are 'Hawk Roosting' by Ted Hughes and 'The Eagle' by Lord Tennyson. They are both poems about birds of prey. I am going to compare and contrast them through different features of the poems. These are theme, development of ideas, language, tone, rhyme, rhythm, imagery, mood and atmosphere and context. I am also going to write about my reactions to each of the poems. Both of the poems are describing birds of prey. The Eagle focuses on the dominant side of the bird while Hawk Roosting focuses more on the ruthless side of the bird. They both start with the bird in an elevated position and emphasise the birds poise. Hawk Roosting says, "I sit on the top of the wood, my eyes closed." The Eagle says, "close to the sun in lonely lands." The two poems speak admiringly of the birds and describe the appearance of them. Hawk Roosting says, "my hooked head and hooked feet." This gives us a picture of the hawk's big claws and its arched back. ...read more.

This lightens the mood as there are many brutal, violent words in the poem. I think Hawk Roosting uses a wider range of language which helps in describing the hawk. Different tone has been used in each poem. Lord Tennyson has used admiration in The Eagle, he admires it. He gives the eagle human qualities, "hooked hands...he stands." This shows that Lord Tennyson thinks that the bird is superior. He also describes it as majestic, he is alone, above "HIS mountain walls." The eagle is dominant and remote. The Eagle is optimistic, in that all the good qualities of the eagle are described. The Hawk Roosting is more realistic. It describes the hawk's instinct to kill and destroy, "my manners are tearing off heads." The poem is in first person, "I...my...me." This indicates that the hawk thinks everything revolves around him. Hawk Roosting also contains some irony, "the sun is behind me." This is ironic because the sun is always behind him, when he goes to attack his prey they are blinded by the brightness. It also means that the hawk thinks the sun is behind him in the pecking order, he is superior to the sun, which is ironic because the sun is the giver of life. ...read more.

The Eagle also contains onomatopoeia. It says, "clasps...wrinkled." The product of this is an expansion of the visual image created in the mind. The two poems have different moods. The Eagle is romantic and peaceful whereas Hawk Roosting is complicated and violent. The Eagle is undemanding and easy to read, whereas Hawk Roosting takes a lot more effort and time to understand it. At first this may seem an advantage that The Eagle is easily understood but as Hawk Roosting is more complicated a lot more can be taken out of it. Each of the poems were written in different eras. The Eagle was written in the 19th Century and Hawk Roosting was written in the 20th Century. This reflects the content of the poems, which I have already commented on. The comparison between the two poems shows how much society does influence poets in their writing. My reactions to the two poems are mixed. I like The Eagle because of its order and rhyme making it easy to read but as it is undemanding it does not leave a lasting impression. Hawk Roosting is harder to read as it isn't ordered but I like it because after reflection there is a lot in it. Therefore I think Hawk Roosting is my favourite of the two poems. ...read more.