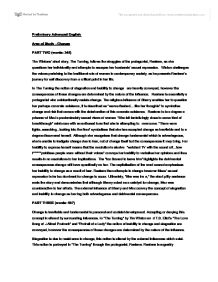 Preliminary Advanced English Area of Study - Change PART TWO (words: 348) Tim Wintons' short story, The Turning, follows the struggles of the protagonist, Raelene, as she questions her individuality and attempts to escapes her husbands' s****l repression. Winton challenges the values pertaining to the traditional role of women in contemporary society, as he presents Raelene's journey for self discovery from a critical point in her life. In The Turning the notion of stagnation and inability to change are heavily conveyed, however the consequences of these changes are determined by the nature of the influence. Raelene is essentially a protagonist who unintentionally resists change. The religious influence of Sherry enables her to question her perhaps concrete existence, it is described as "waves flashed....like her thoughts" to symbolise change and risk that comes with the deterioration of this concrete existence. Raelene is to a degree a prisoner of Max's predominately s****l views of women "She felt tantalizingly close to some kind of breakthrough" reinforces with an enthused tone that she is attempting to overcome. "There were lights..searching...looking into the fires" symbolises that she has accepted change as inevitable and to a degree discovered herself. ...read more.

Accepting or denying this concept in altered by surrounding influences. In "The Turning" by Tim Winton and T.S. Eliot's "The Love Song of J.Alfred Prufrock" and "Portrait of a Lady" the notion of inability to change and stagnation are conveyed, however the consequences of these changes are determined by the nature of the influence. Stagnation is due to resistance to change, this notion is altered by the external influences which exist. This notion is portrayed in "The Turning" through the protagonist, Raelene. Raelene is arguably imprisoned by her husband, Max's predominately s****l views of women. Sherry acts as a catalyst for change; she enables Raelene to escape the prison of her arguably meaningless existence. The symbolism "waves flashed....like her thoughts" describes the waves as her previous beliefs of consistency which are broken as they approach the sand, indicate that on a personal level she is going to take risks and allow change to occur. Similarly in Eliot's "Prufrock", the concept is explored. Prufrock contemplates the consequences of change and as a result fails to accept change, however his contemplating is perhaps an influence of his some what vacillating approach to society and women in particular. ...read more.

In T.S. Eliot's "Portrait of a Lady encapsulates the thoughts of a Lady who accepts that change is occurring, nevertheless she yearns to return to her youth. "Lilacs are in bloom...hold it in your hands" she holds a symbol of blooming youth attempts to hold on to the youth, but although it flows, it does not flow to her. She is able to allow change to occur, however she longs for it to discontinue. Her longing to return to her youth is initiated and influenced by the young male who searches for wealth, she feels that wealth is perishable however youth is more valuable. The lady on a psychological level hopes that her wealth can be exchanged for youth. Inability to change is explored in Winton's short story and demonstrates that external influences shape the consequences change may have. In contrast, Elliot's "Portrait of a Lady" considers the ability to change which are hindered by the youth of society longing for wealth. Change is an inescapable phenomenon. Stagnation and inability to change are influenced on various levels and determine whether the consequences are beneficial or detrimental. ?? ?? ?? ?? ...read more.