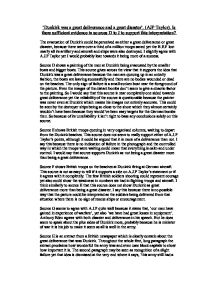 'Dunkirk was a great deliverance and a great disaster'. (AJP Taylor). Is there sufficient evidence in sources D to J to support this interpretation?

'Dunkirk was a great deliverance and a great disaster'. (AJP Taylor). Is there sufficient evidence in sources D to J to support this interpretation? The evacuation of Dunkirk could be perceived as either a great deliverance or great disaster, because there were over a third of a million troops saved yet the B.E.F lost nearly all its artillery and aircraft and ships were also destroyed. I slightly agree with A.J.P Taylor yet I would probably lean towards it being more of a success. Source D shows a painting of the men at Dunkirk being evacuated by the smaller boats and bigger boats. This source gives across the view that it supports the idea that Dunkirk was a great deliverance because the men are queuing up in an orderly fashion, the boats are leaving successfully and there are no bodies wounded or dead on the beaches. ...read more.

I would say that source supports Dunkirk as not being a great disaster more than being a great deliverance. Source F shows British troops on the beaches at Dunkirk firing at German aircraft. This source is not as easy to tell if it supports a side on A.J.P Taylor's statement or if it agrees with it completely. The few British soldiers shooting could represent courage yet also could show the weakness in numbers we had in fighting troops and aircraft. I think similarly to source E that this source does not show Dunkirk as great deliverance more than being a great disaster. I say this because there is no possible way that the picture could be interpreted as the soldiers being delivered from that situation where there is no sign of rescue ships or encouragement. Source G seems to agree with A.J.P quite well because it states that, 'our men have gained in experience of warfare', yet also 'we have had great losses in equipment'. ...read more.

Source I is A.J.P Taylor's view of Dunkirk himself which obviously reflects his own statement. His points are that even though nearly the whole army was saved there were great losses in weapons, aircraft and sea vessels. His facts are all given in numbers which shows that he understands all the losses. I myself disagree with A.J.P Taylor and his view that Dunkirk was a great deliverance and a great disaster. I believe that Dunkirk was a great deliverance because even though military wise the B.E.F lost lots of equipment, basically the whole army was rescued and more importantly, as shown in source G, it raised the morale of the people back home greatly. Knowing that our army was back safe was a lot more important than some ships to most civilians and it also gave the newspapers the story of the heroic fisherman who saved the army which also raise morale. Yes, there were losses yet the British spirits were more important. ...read more.