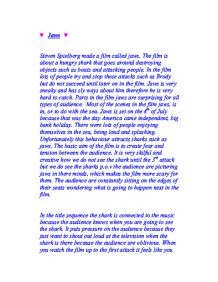 ? Jaws ? Steven Spielberg made a film called jaws. The film is about a hungry shark that goes around destroying objects such as boats and attacking people. In the film lots of people try and stop these attacks such as Brody but do not succeed until later on in the film. Jaws is very sneaky and has sly ways about him therefore he is very hard to catch. Parts in the film jaws are surprising for all types of audience. Most of the scenes in the film jaws, is in, or to do with the sea. Jaws is set on the 4th of July because that was the day America came independent, big bank holiday. There were lots of people enjoying themselves in the sea, being loud and splashing. Unfortunately this behaviour attracts sharks such as jaws. The basic aim of the film is to create fear and tension between the audience. It is very skilful and creative how we do not see the shark until the 3rd attack but we do see the sharks p.o.v the audience are picturing jaws in there minds, which makes the film more scary for them. ...read more.

This is intense. He doesn't want to say anything incase he has got the complete wrong idea. He continues to watch the water, this goes into mid shot now. Brody has seen the hand with the crabs. Brody is worried for the people in the sea. When there is a man wearing a black hat in the sea, the audience jump to conclusions and think it is a shark. The audience think there Is going to be another attack, but the suspense is built up then let down again. At the point when the sunburnt man is talking to brody, blocking his view the audience get tense. Brody is the only person that knows what is going on and now he is distracted and cant see the water. Then when we get to the point of the girls legs underwater, it is a mid shot but also the sharks point of view. The audience are seeing what the shark can see. Its almost like we are inside the shark. The audience know that the shark is there now. ...read more.

the tension is fierce now it's the ending of the film and the boys are out there in the rough sea. The boat tipping and rocking. This is where the tension is because the audience knows there is a shark out there swimming around them waiting for the right opportunity to snap the boat and whoever is on it at that time. It makes the audience think when there is only one man left on the boat and the audience are sure that there has been two killed but actually there was only one. My view on the scariest part of the film is the ending when the three men are trying to catch the shark. Built up to the best part of the film. The film is well worth waiting for the ending. Jaws is a classic film of Spielberg's I think it is the scariest because all the suspense is built up wandering if they are going to catch the shark or not. Then there is a glorious ending when they catch jaws once and for all. Kerry Keenan ? ? ? =] ? ? ? ...read more.